The VIVISUN 5000 is a complete ready-to-use Electro-Optical Display System consisting of four Programmable Multifunction Pushbuttons (PMP), one Refresh Processor Unit (RPU) and four cables which connect each PMP to the RPU. The PMP display contains of a dot matrix of 560 LED pixels with drive electronics, a solid state Hall effect switch and a mechanism to provide positive tactile feedback when the PMP is depressed. The Hall effect switch signals the RPU that the PMP has been actuated. The operator receives information from the host computer by the various legends presented on the PMP display which are generated by system software. The operator initiates host computer action by depressing the PMP displaying the legend representing his selection.

The RPU contains the refresh and processing electronics necessary to function as an intelligent interface between the PMP and the host computer. It receives coded messages from the host computer and converts these messages to specific dot patterns which are displayed as legends on the PMP. When a PMP display is actuated, the RPU sends a coded message to the host computer identifying which PMP was actuated. The RPU also independently handles routine "housekeeping" functions such as self-testing, display refresh, luminance and blinking control so the host computer can concentrate on priority functions. The RPU's small size can be easily accommodated into rack mounted designs or separately mounted for severe vibration environments. 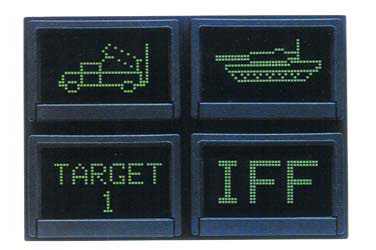